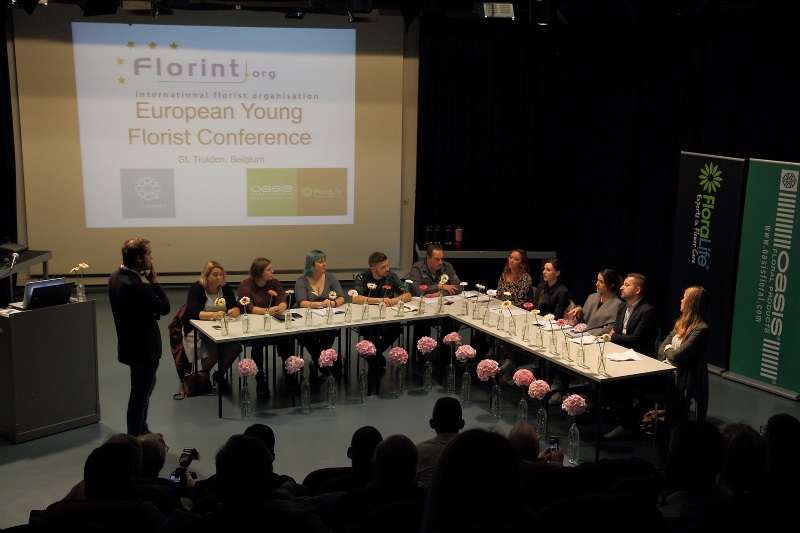 Bring 10 young florists from all over Europe together at the table and have them speak their minds on the state of the industry. What issues occupy them the most? What risks and opportunities do they see? That simple premise was the foundation for Florint’s recent European Young Florist Conference, held in Belgium on Sept. 16 alongside Eurofleurs 2017.

As the International Florist Organisation, we have been involved in a fair share of round-table discussions and business conferences over the years. None quite like this recent one, however. Having 10 outspoken junior florists take the stage to address the issues facing the sector – generally debated only by their elders in forums like these – was refreshing.

And that was exactly what we had aimed for. Like organisations, discussions tend to benefit from a diversity of perspectives and fresh input. And too often, the voice of the younger generation does not carry all the way to the marble halls of power. That is a pity. Because our world is transforming rapidly due to the far-reaching influence of digital technology. And it is the younger generation that has the deepest, most instinctive grasp on the changes underway. Cue for the European Young Florist Conference, which was not the brainchild of Florint alone. The idea came about as a result of brainstorm sessions that we regularly engage in with two of our key partners: Smithers-Oasis and Florismart. The two companies share our forward-thinking approach to the florist industry, and agree that young florists need to be listened to, and supported, more.

The Flower Council of Holland enthusiastically participated as well, once they heard of the idea. Many thanks to all three of them for making this conference a reality!

Three hours of intense talks bring up countless interesting points and highlights. And the experiences of florists from diverse countries and regions inevitably differ. But the majority of our panel saw the move towards an increasingly digital trade as a given. And the need for a good website and visual, personal marketing via social media like Instagram just as much.

Artistry and passion came first for all our young floral arrangers, though it is rarely recognized by the consumer. None of them became a florist for primarily economic reasons. And the many business competencies demanded by the job were seen as hard to master, taking time to learn. Time, however, is always in short supply.

Floristry schools in major cities were generally seen as capable, but many of those in rural areas judged as insufficient, not preparing youngsters very well. They were too theoretical in their approach, or not attuned to the modern economy. All the young florists felt they had a whole lot left to learn in practice, as apprentices or working after school.

There was a shared desire for regulation to highlight the quality florist over the flower seller. Both the flower assortment and floristry tools have become widely available, also to consumers via internet and supermarkets. So how does a florist set himself apart otherwise, they wonder?

Many of our young arrangers started out as (or preferred working as) a freelancer/studio florist, feeling a shop is a risky endeavour. And they emphasized the importance of being available on many channels; recognizing the big differences in communication between younger and older customer groups, and offering personalized work.

On a personal level, the florists evidenced a clear desire to be flexible; to balance working life and free time. It’s a classic millennial trait that has not bypassed our sector either.

Finally, although digital was considered a clear given, these youngsters still abided by the classical points of being a florist. Mainly, they enjoy going to look for their product at 5 AM at the markets, having coffee with their colleagues, and getting a real feel of what they buy.

The conference was divided into 3 round-table discussion sessions, with a different moderator giving an introductory speech every time. Our 10 junior florists then discussed the matter for about 45 minutes, followed by 15 minutes of open debate with the audience. Each session focused on a specific topic:

1. The world of young florists today

2. Florist business in the near future

Gorgeous Spring Inspiration for you from Denmark