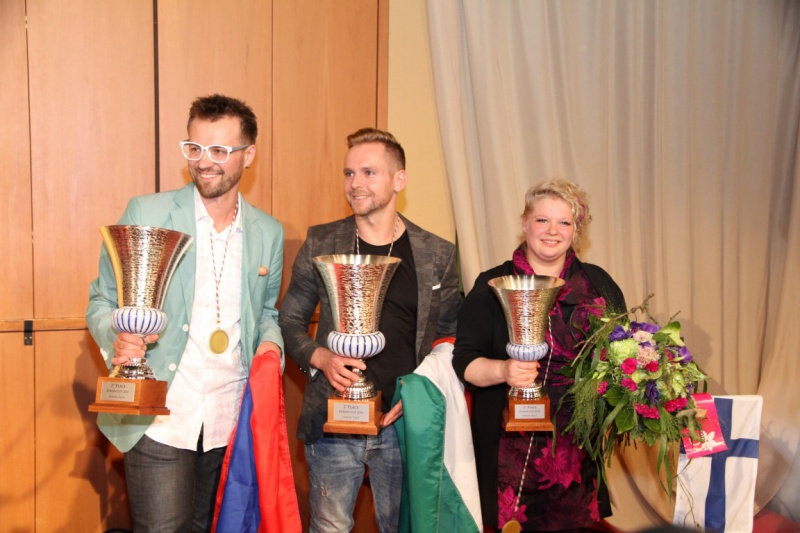 Wow! The Florint Europa Cup 2016 was held at the vast Magazzini del Cotone event centre in the harbour of historic Genoa this weekend. And anybody who wasn’t there, will wish he had been. It was without a doubt the most ambitious European Floristry Championship ever envisioned. And, looking back on it, among the most successful floral art events of this scale in recent memory.

From the local Italian scene, Ivan Berghella gave an inspired performance, as did the duo of Silvano Erba and Daniela Pighetti. An extravagant show dedicated to bridal work was put on by Mauro Adami and Marco Introini. Add it all up, and you begin to get a picture of the scale and ambition of the event. The quantity as well as quality of the floristry on display was simply astonishing!

A venue fit for a champion

The Europa Cup 2016 was held at the Magazzini del Cotone conference centre, a chain of monumental cotton warehouses in the hip Porto Antico harbour area of Genoa (Italy), which has been redesigned to accommodate huge events. Can a florist championship possibly make good use of such a big event location? Where some may have had their doubts up front, those will surely have been dispelled now.

Center stage in the impressive auditorium, the championship competitors looked completely in their element. As Tamás Mezőffy from Hungary was being crowned the new European Florist Champion, it was clear that not only he was very pleased, but the other 22 competitors and members of the audience just as much. Organizers, contributors and exhibitors, too, signalled they were very satisfied. Up to 2000 visitors had been left in awe. And, most important of all perhaps, the general atmosphere of the Europa Cup 2016 had been extraordinarily pleasant.

Thought-provoking challenges; much to see, and learn…

The six championship assignments had distinctly Italian themes. The 23 competitors created a floral picnic table design dedicated to Pesto Genovese; a bridal bouquet for a beautiful ‘gentildonna’ on a Vespa, and a plant arrangement for the shop window of an Italian men’s fashion designer (think: Armani, Versace…). Classic, adorable Fiat 500 automobiles – kindly made available by the passionate Fiat 500 Club Italia – were also lavishly decorated with seasonal flowers from nearby Sanremo, famous for its flower growers.

The last two assignments took place on stage, and pushed the competing floral designers to their limits. But it wasn’t just the championship itself that was highly entertaining. A wide range of demonstrators worked their floral magic. Dutch talent Pim van den Akker teamed up with his friend, and culinary conjurer, Yuri Verbeek to put together a skilful, multi-disciplinary Food Floral Fashion show. The result was tantalizing indeed, to multiple senses.

On the top floor of the venue, online flower auction Florismart had erected a complete ‘Flower Lab’ that instructed florists about how to connect with the Millennial generation. FLOOS, headed by Carles J. Fontanillas from Spain, showcased some amazing floristry there too. And workshops were dedicated to contemporary topics like sustainability, flower sales strategies and social media tips, but also the old arts of bonsai growing, and floral and herbal medicine. Wherever you looked during the two days of the Europa Cup, interesting things were going on!

Organizer International Florist Organisation Florint chose to put the bar very high with this event. It worked out, and for good reasons. The flower sector clearly harbours a reservoir of artistic talent and showmanship potential that deserves such a stage. Flowers, by nature, are happiness bringers. And florists capture that natural joy in their arrangement work. The fantastic arrangers present in Genoa created visionary floral pieces, which would not have looked out of place in an art museum. In fact, if the base materials weren’t perishable, they would have been.

That tremendous artistry on display, is the best promotion the flower industry could wish for. Thousands got to experience it in person, while photos and video from the championship will reach a global audience of millions, amplified by the modern world’s fondness for Facebook, Twitter and the like.

Big names in the flower sector, such as Smithers-Oasis, MPS, Chrysal and Barendsen Flowers, have caught on to this. They backed the Europa Cup with tremendously valued support, as did the famous Sanremo flower market, Interflora Italy and numerous local Italian organisations. Many others, in hindsight, will be wishing they had been on board too!