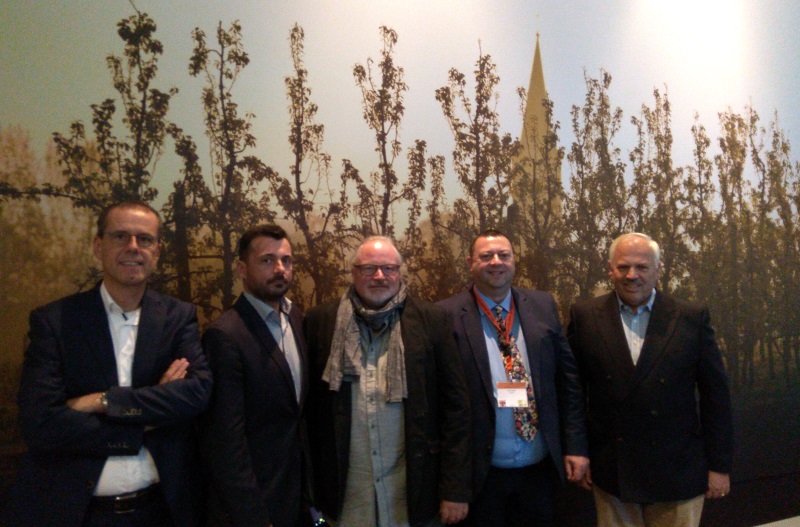 Florint held its annual General Assembly with its member organisations in Sint Truiden, Belgium, alongside the Eurofleurs Young Florist Championship. We summarize the main happenings and resulting organisational changes for you, below.

The General Assembly (GA) in the morning of September 15 was opened by the president of Florint, Mark Ward. He started off by welcoming representatives from a number of Florint member countries. Afterward, the overall position of International Florist Organisation Florint was discussed by those present, including many internal and administration issues.

Going out of office by rotation were Simon Ogrizek, from Slovenia, and Annemie Duchateau, from Belgium. Both had served two full terms, Simon as secretary general and Annemie as vice president. A vote of thanks was given.

Simon has been retained by the DC (Direction Committee; the board of Florint) in an advisory capacity. Moreover, it was agreed by all those present that he be nominated as president-elect for the GA in 2018 – when the current president, Mark Ward, will come to the end of his term.

New members elected to the board

New DC (board) members were nominated and elections took place. Two nominations had already been received from Poland and Belgium earlier. Norway then nominated Great Britain during the General Assembly itself.

The votes were taken by secret ballot (as is traditional), counted and then verified by two persons. Robert Milkowski (SFP, Poland) and Brian Wills-Pope (BFA, Great Britain) were duly elected to serve as board members on the DC. We welcome their professional input in the coming years!

The post of vice president had already been duly agreed upon by the existing DC, and Heinrich Göllner (FDF, Germany) now holds this office – having been re-elected at the GA for a further three-year term.

A progress report and presentation was made about Florint’s KA2 Project, by Mike Bourguignon (Florint Education Project Manager). The KA2 project is a venture together with Flornet that focuses on the development of a progressive, contemporary floristry curriculum for schools. It is funded under the EU’s Erasmus+ education program. Florint Communications Manager, Jonas Zwitserlood, also gave an overview of the organisation’s communication activities over the last year, and the strategic plans for 2018.

A new member from China

Last but not least, China presented themselves for non-European membership of International Florist Organisation Florint. A proposal that was enthusiastically accepted.

Mr. Rain, from the Uniflorist Association in China, gave an overview of their organisation and all present looked forward to a very close working relationship that would be mutually beneficial.

Official Launch Florint Europa Cup 2016: all you need to know about the European Florist Championship!

Alex Choi from Korea triumphs in a sparkling World Cup!