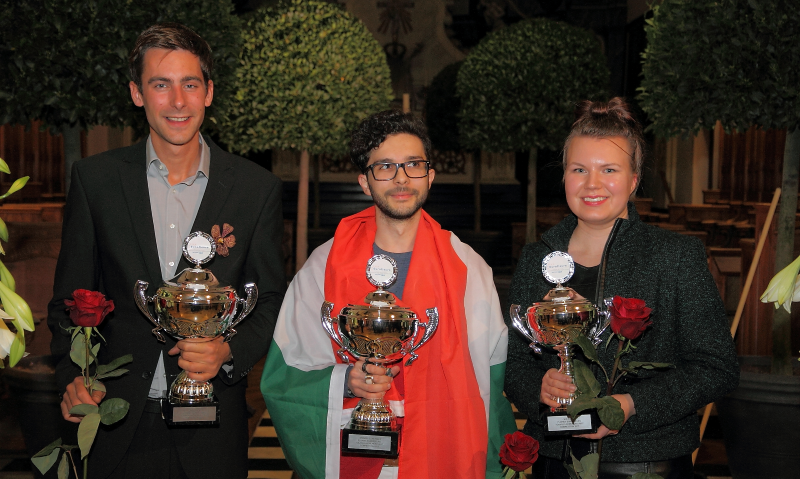 Competing in the junior edition of the European Championship, held from September 15-18, were 10 of the continent’s most talented young florists. Most of them are the junior national champions of the countries they represent. Over the course of 5 difficult assignments, spread out over 2 days, their amazing flower arrangement skills were put on display.

The European Championship for Young Florists is held in a different country about every 4 years. Florint, the International Florist Organisation, supervises the contest, while one of our member associations is chosen to organise it. In 2017, that was the Royal Union of Belgian Florists (KUFB/URFB), who did a wonderful job. Even Belgium’s Queen Mathilde herself came by, to admire the show!

The championship results of Eurofleurs 2017

The participating young florists had to envision, and beautifully execute, 5 works: an installation with flowers and plants; a floral cake; a bridal bouquet; a body decoration, and a surprise “let’s go wild” hand-tied bouquet. Many of the assignments allowed for preparation at home. However, the last 2 had to be performed live on stage, in a historic cathedral, in front of a big audience. Excitement guaranteed!

The talented Gábor Nagy from Hungary won the first round, impressing the jury tremendously with his floral installation. The theme, here, was “the sins of Adam & Eve”: the piece had to symbolize the biblical temptation of the forbidden fruit, and prominently use tree branches as well as fruit: Gábor would have won the second round as well, were it not for a small technical penalty applied by the championship judges: ever alert they are! As a result, the winner of task 2 was Belgium’s celebrated talent Sören van Laer, with his captivating, soft-colour cake design. It would have been the eye-catcher at any wedding buffet, which was exactly the assignment: Round 3 was about making ‘Indian summer wedding’ bridal bouquets. This was clearly a type of arrangement our young florists excelled at! High marks were given by the members of the jury to many of the impressive pieces. But one stood out in particular, receiving the highest total score of all the arrangements made for Eurofleurs 2017. This was the bridal bouquet by Finnish competitor Heli Haapatalo: marvellous both for the originality of its shape, the perfection of its design work, and its clever take on the Indian Summer theme: Final assignments 4 and 5 were performed live on stage, on a catwalk, as part of an evening of entertainment organised by Belgian florist association KUFB. Our young florists had to make a ‘Fruit Queen’ body adornment, which had to cleverly fit in fruit alongside flowers. Not an easy task! Belgian competitor Sören van Laer was clearly in his element here, however. He won this round by designing a well-executed Gloriosa dress, and a delightful hat to go along with it. When it was time to design the surprise bouquets, it was already around 11 in the evening. Our young competitors had 2 days of gruelling work behind them, and the exhaustion was showing on their faces. But they managed to keep their heads together and score high marks, nonetheless. An impressive feat! In the end, the jury felt that the passionate bouquet by Finland’s Heli Haapatalo did the best job at capturing the spirit of “let’s go wild”. See for yourself, here: > Many more photos and videos of all the Eurofleurs 2017 arrangements can be found here, on the famous Facebook page of International Florist Organisation Florint!

While the audience in the monumental Minderbroeders church was treated to a beautiful – and entirely fitting – live version of the Hozier hit song “Take me to Church”, the championship jury quietly went to work. They added up all the scored points, triple-checked their calculations, and were able to declare the final winner of Eurofleurs 2017 around midnight: Gábor Nagy, the Hungarian prodigy, had outdone his 9 young colleagues!

A sensational achievement, plus a big compliment for Hungary. Which has not only produced more Eurofleurs winners than any other nation, but also is the home country of the reigning senior European Champion: Tamás Mezőffy. He came out victorious in the Europa Cup 2016 in Genoa, Italy, last year. Congratulations are in order!

The complete rankings can be found in the table below. (Please note that the points in the columns marked “t.” represent penalties applied by the judges. The deductions are in percentage points).

Jury president Thomas Ratschker and his certified European floristry judges faced a daunting assignment, quite like the young florists did. Evaluating 50 complex floral arrangements on all their technical and aesthetic merits is far from an easy task. Both his team, and the members of the Technical Committee supporting them, did a remarkable job. We extend our gratitude to them for their hard work, as volunteers no less.

The monumental venue of Eurofleurs 2017

The European Championship for Young Florists 2017 took place in and around the ‘Minderbroederssite’, a monumental 13th-century monastery in Sint-Truiden. To allow such a big event to take place in such a historic setting is unique, to say the least. So we would like to wholeheartedly thank the kind fathers of the monastery for their immense hospitality.

And we certainly could not have done it alone…

Many people have worked tremendously hard to make Eurofleurs 2017 a success. They are too many to name, in fact. But we do want to take this moment to express heartfelt thanks to our most important partners and sponsors: Agora, Euroveiling, Smithers-Oasis, Florismart, the city of Sint-Truiden, Tourism Sint-Truiden, the province of Limburg and Vlam.be. We could not have done it without your help!

We hope to see you all next time, in Katowice, Poland, for the 2020 Europa Cup. The amazing European Floristry Championship for senior florists!