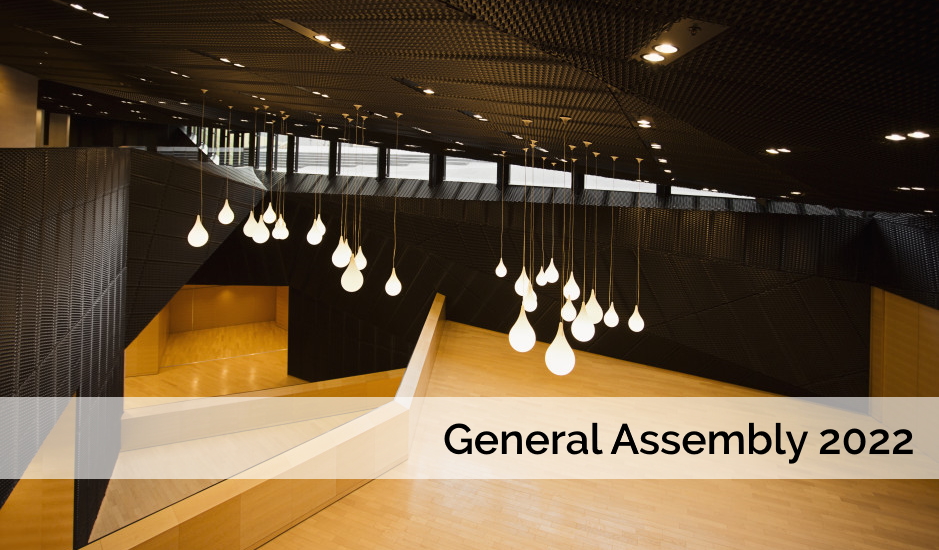 Alongside our highly successful EUROPA CUP 2022 in Poland, the annual General Assembly of the International Florist Organisation took place. We looked back on a tumultuous year together, and discussed our priorities and plans for 2023 and beyond. Two members of the Board of Directors were also successfully re-elected during our Members’ Conference; both will sit for another 3-year term.

Almost two dozen delegates from fourteen member countries attended FLORINT’s 2022 Members’ Conference. The gathered group reflected on the past years, reviewed the finances and ongoing programs, and decided on the upcoming activities. A central theme that guided the assembly was the notion of ‘added value’. How does an association prove its worth – and make the business life of its members easier..?

FLORINT’s ongoing European Floristry Championship was, of course, the “talk of the town”. Our General Assembly took place in the middle of the EUROPA CUP 2022 festivities. However, we refer you to our earlier news article for all the highlights of our EUROPA CUP championship.

After a short introduction round, the General Assembly began with a President’s Speech by Simon Ogrizek, the sitting President of FLORINT. He summarized all that FLORINT has done in 2021, is currently doing in 2022 and is planning for 2023. Then asked for input from the delegates about the activities to be developed.

The financial results of the past years were presented by Board member Marco Maase, who had a reason for optimism. FLORINT has cut costs in the last few years and is in a good position monetarily, although some worries about debtors remain. The COVID crisis years have impacted some organisations worse than others. And the next years will bring new budgetary challenges, with rising inflation and energy costs.

The delegates described the current affairs in their countries and the main challenges their associations face. The discussion then moved on to the crucial question of what instruments FLORINT can develop to help them address those challenges. This conversation resulted in some good ideas for new tools to add to our member ‘toolbox’.

Statutes & Elections for the Board of Directors

At last year’s General Assembly, a proposal was accepted to allow a member of the Direction Committee to keep their seat for an additional term. This change would enable FLORINT to retain effective board members for nine years, rather than the current maximum of six (two 3-year terms).

However, this would require a change to the Statutes of the International Florist Organisation. And as the 2022 General Assembly took place online, the signing of new Statutes could not occur then. The amendment accepted last year was officially added to the Statutes now. The updated Statutes were then formally signed by all the members present.

Elections could then be held. There were two open seats on the Direction Committee, but this year no new candidates had stepped forward to fill them. By a show of hands, Financial Director Mr Marco Maasse was re-elected to FLORINT’s Direction Committee for a third 3-year term. Ms Lena Stryjska, the General Secretary of FLORINT, was also re-elected to a second 3-year term. Both received a lot of praise from the delegates for their hard work.

Member associations pay an annual contribution to FLORINT, consisting of a fixed part, a small add-on fee per member florist, and a championship fee. The former two cover the costs of our added-value projects on behalf of our florist associations, while the championship fee funds our EUROFLEURS and EUROPA CUP championships.

Because of the difficult situation many of our florist associations face, we have decided not to adjust the annual contribution this year (despite the high inflation). It will stay at the 2022 price level:

EUROFLEURS 2023 – the European Championship for Young Florists – will be held in Slovenia in Summer of 2023. The venue will be the historic botanic garden Arboretum Volčji Potok, near the capital Ljubljana. The exact dates are August 22 to August 26 of 2023. Mark your calendar now!

Two main themes for the EUROFLEURS competition will be Sustainability and Back-to-Nature. The event will take place outdoors, as Slovenian Summers tend to offer comfortable weather.

Last but not least, the spectacular FLORINT 2025 World Championship in Floral Art will be hosted by Dutch florist association VBW from August 26 to 31 of 2025! The venue will be the famous World Forum in The Hague, the ‘political Capital’ of The Netherlands.

This mega-championship is the natural evolution of Florint’s EUROPA CUP tournament: global in name, and even more spectacular. Don’t miss it!