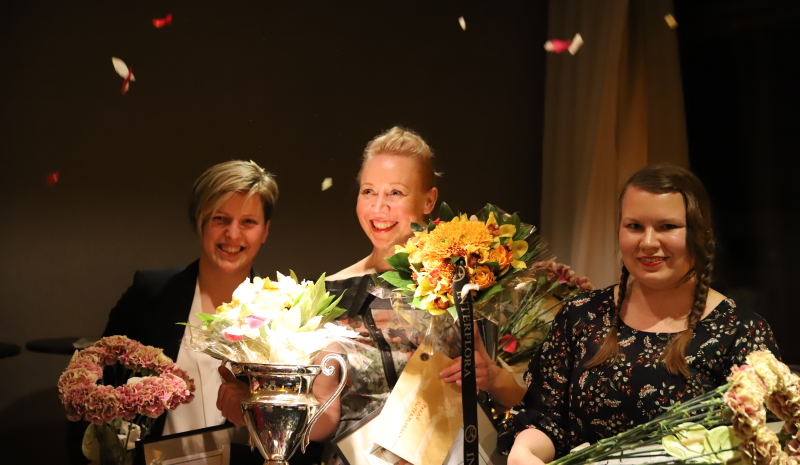 The Finnish Florists’ Association’s Helsinki District organized Helsinki Open 2018, an international floristry competition, during the SpringFair at the Expo and Convention Center in Helsinki. The competition took place in Lasigalleria on Saturday 14th of April and consisted of three different tasks, all of which were surprise tasks. The proud winner of the competition is florist Saija Sitolahti from Järvenpään Kukkatalo, Finland.

The first surprise task was named ”Wreath for a Spring Fairy”. The task was to make a floral wreath and present it on a pillow made by Wickholm Form. The highest points were given to Tomasz Max Kuczynski from Poland. The second best in this task was Säde Alanen from Finland and third was Aire Reenumägi from Estonia.

The second surprise task was ”Fairytale Tree”. A construction, made by Lyhty workshop, a non-profit organization providing disabled adults workshops and learning possibilities, was the base for this task. Hanna Vehkalampi from Finland got the highest points in this task, while second-highest points went to Heli Haapatalo from Finland with Saija Sitolahti from Finland in third.

The Third and final task was ”Spring bowl”. The compulsory part in this task was to include a bowl from ShiShi. The bowl couldn’t be altered or harmed in any way. In this task Elisabeth Schoenemann from Germany gathered the most points from our judges, leaving Saija Sitolahti and Berit Skjøttgaard Laursen behind her.

> Click here to view the fantastic photos of the arrangements made during the contest!

The surprise tasks were revealed in the morning of the competition day and all the competitors were given identical materials by the organizing party. Each competitor had a toolbox of their own and no assistance was allowed during the competition.

There was a closed judging session and the judges didn’t know which competitor made which design. The judges were Karolina Ładyżyńska–Skrzypek from Poland, Heidi Stubb from Finland and president of the jury Tuija Näriäinen, also from Finland.

The winner of the competition with the highest points in total is Saija Sitolahti form Järvenpään Kukktatalo, Finland! The second place was awarded to Elisabeth Schoenemann from Hamburg, Germany and Heli Haapatalo from Ikaalinen, Finland won third place. Congratulations to the top three!

The Finnish Florists’ Association’s Helsinki District was presented a Program of the Year award at the MESOAJA Gala, organized by Messukeskus Helsinki, for all its efforts.

Best Wishes for 2021 from the President of Florint