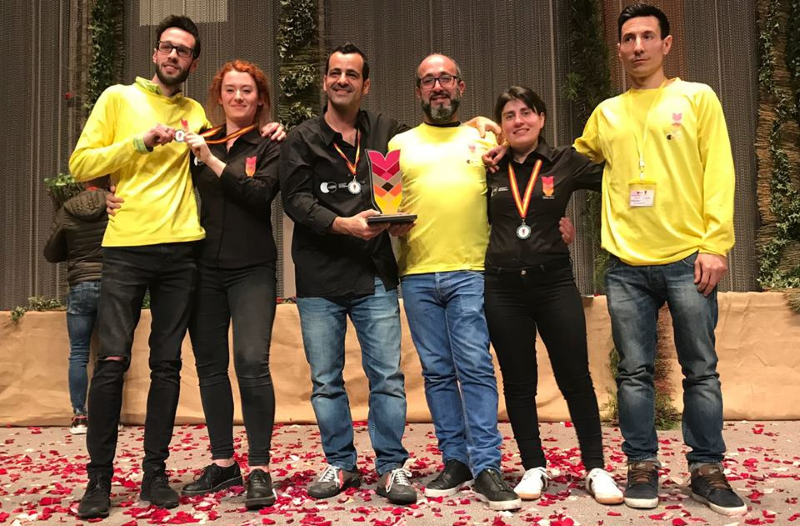 Carles Jubany Fontanillas has triumphed in the Spanish Floral Art Cup 2018, organized by our member organisation AEFI, and is the new Spanish champion in floral design! Readers may remember Carles for his creative work with online floral recipe library FLOOS, which has regularly been featured on the Florint website.

His victory means Carles Fontanillas will be representing Spain in the Europa Cup, the European Florist Championship, that will be held in 2020 in Poland. The Basque Irati Tamarit finished in second place while Salvador Miro came in third.

Six participants took part in the Spanish championship. The competitors had to design six floral creations over the course of the contest’s rounds. Photographs from the amazing floral art are available here on the AEFI Facebook page.

The Spanish Floral Art Cup is a competition organized by Florint member AEFI every four years. The 2018 edition took place in Asturias, an autonomous community in the north of Spain, on the 23rd and 24th of February.

With this award, FLOOS extends the long list of titles won by its master florists, adding to the national and international success of figures such as Alex Choi, Frédéric Dupré, Per Benjamin, Pirjo Koppi, Natalia Zhizhko and Daniel Santamaria.

Due to a miscalculation during the tabulation of the scores handed out by the judges, it was initially accidentally reported that Maria Miras won third place. She, in fact, came in 4th: Let’s take a closer look at the Europa Cup 2016 results, high-scoring arrangements, and individual round winners!