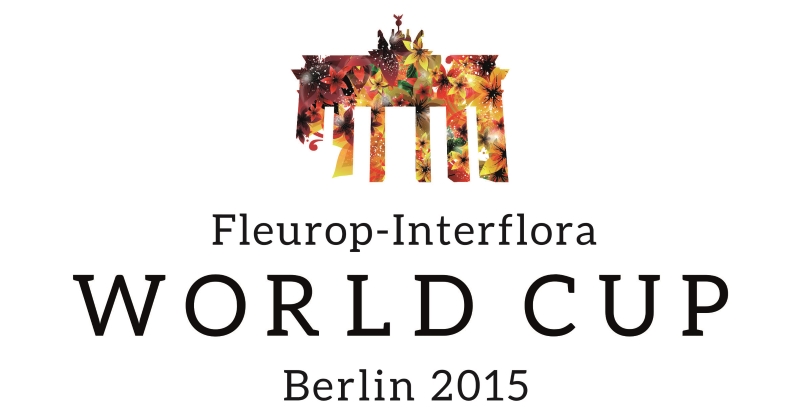 The intense spectacle has come to an end. And among the rubble of shattered dreams and trampled stems and petals, only one exhausted floral designer stands victorious – his right arm to the sky, proudly holding up a colossal-size World Cup trophy: ladies and gentlemen, Alex Choi!

In second place: the contender from the United Kingdom, Neill Whittaker, who could bask in a lot of support from the large contingent of British fans and had a great run this tournament. Pirjo Koppi from Finland, the only female designer to make it to the final five, secured a deserved third place by staying just ahead of Japan’s Aritaka Nakamura. It made for a thundering final to the Fleurop Interflora World Cup 2015 after three exciting competition days in the massive Arena Berlin, where many thousands of floristry fans from all over the world had come to gather.

So many people came to see the World Cup participants in action, in fact, that tickets for the event sold out. A number of visitors had to wait in line for a while before finally being allowed inside the venue, which had to do with the maximum visitor amount having been reached according to the organizers. It seemed to be the only blemish on an otherwise practically spotless championship.

Photos of all the spectacularly beautiful arrangements which the 26 World Cup participants created over the course of 4 rounds can be found here, on our Florint Facebook community page. Please click the link to open the album in a new browser window!

The approach to the finals

Only five of the World Cup participants made it to the final showdown on the last day: Aritaka Nakamura from Japan, Mehmet Yilmaz from Turkey, Neill Whittaker from the UK, Alex Choi from Korea and Pirjo Koppi from Finland. They had to complete a surprise task live on stage in front of a huge audience, bringing an already tense championship to a new level of nail-biting intensity.

The day before, 10 out of the starting 26 floral arrangers had managed to make it to the finals – the five mentioned above plus Tanus Saab (Brazil), Juergen Herold (Germany), Martin Groen (The Netherlands), Aslaug Nevstad Hildre (Norway) and Sofie Danielsson (Sweden).

Over the course of four rounds during the first two days of the ‘Freedom’-themed championship, they had managed to rack up the most points by impressing the professional World Cup jury with their unexpected hand-tieds, organic, recyclable arrangements and 100% Kalanchoe surprise designs.

Two other floral designer of great renown and experience, Per Benjamin and Max van de Sluis, also gave workshops in the run-up to the championship. Former world champion Per tackled the topic of ‘Floral Objects’, while Max explained the science of effective wedding floristry to a captive audience.

Florint’s 100-Points International Judging System, which considers many essential design parameters, was the basis for the World Cup’s assessment system. You can learn more about our well-established judging system by clicking here.